Growth and development of grapevines are strongly influenced by the weather. While in the growing period, a certain amount of warmth needs to accumulate in order for grapes to ripen properly, during the winter, grapevine requires a certain amount of cool temperatures to resume normal spring growth. This amount is known as “chilling requirements” and depends on vine variety and climate (Reginato, 2010).

Why to calculate winter chilling?

In the fall when temperatures start to decrease and day length starts shortening, grapevines start to acclimate to cool temperatures and enter into the dormancy phase. We have already broken down grapevine dormancy in one of our previous posts, and to sum it up, we can say that there are 2 types of dormancy during the winter: endodormancy and ecodormancy. In endodormancy phase, the grapevine doesn’t grow even under favorable environmental conditions, due to plant growth regulators inside the buds, which prevent the vine from freezing. During this phase, grapevine with chilling requirements tracks the time spent at lower temperatures, in order to not break the buds before the end of the winter. And once the chilling requirements are met, grapevine enters into ecodormancy phase. In this phase, grapevine’s responds to temperatures: if at this time (that’s usually the case) temperatures are low grapevine will not grow, but once the temperature rises, vines respond to warmer temperatures with deacclimation. The figure below nicely shows what’s happening with the vines during the dormant period, and how vines become resistant to cool winter temperatures (gain cold hardiness). 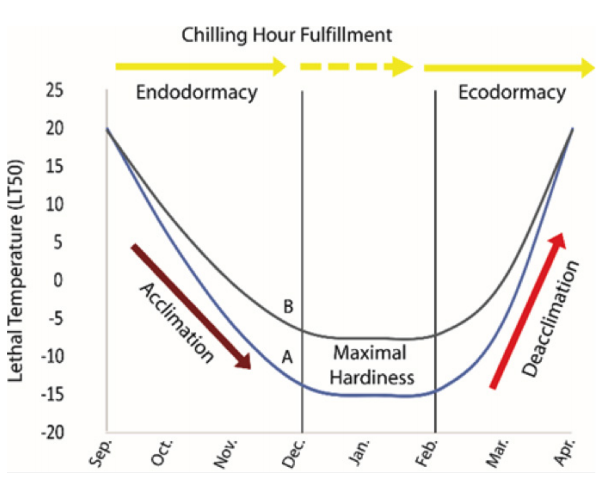 In case if winter is not cool enough for the grapevine to meet chilling requirements, a delayed and/or irregular bud break can occur, and the number of shoots and clusters per vine can decrease, as well as poor fruit development and reduced grape quality can occur. By calculating winter chilling, all of the above mentioned signs of insufficient chilling can be prevented, either with the use of growth regulators, and/or with adjusted vineyard management practices.

Winter chilling is yet another environmental indicator (Bioclimatic indice) that describes the climate conditions of a certain site. It can greatly help farmers with decision-making on:

How to calculate winter chill?

If you would like to know how effective the cold of winter has been in your vineyard, you can calculate winter chill. Several models have been developed for measuring the effectivness of winter chill. Some of them are presented below, together with a short descriptions.

The oldest model is Chilling Hours Model, which calculates the number of hours between 7,2°C and 0°C, as temperatures below freezing point don’t contribute to winter chill acccumulation.

Tabele: Calculation of chill units from hourly temperature data based on the Utah Model (adapted from Richardson et al. (1974)

Since Utah model calculates negative values for warm winter hours, in warmer temperature and sub-tropical climates, this can lead to inaccurate and negative Utah chill units total, despite the fact that adequate chilling was received by the plants. That’s why in warmer climates, Positive Chill Units model and the Dynamic model give far more accurate estimation of winter chilling. In order to calculates chilling units, you need hourly temperature data for your vineyard and do a bit of mathematics, or you can simply start using eVineyard, which will calculate chilling units for each of your vineyards automaticaly.

How many chilling hours grapevine require?

Cultivated grapevine (V. vinifera) originated in the Mediterranean area, therefore grapevine doesn’t require a lot of chilling compared to some other fruit trees. In “normal” winter weather in most of the temperate regions, grapevine receives adequate chilling, however in warm climates and due to climate change and global warming, grapevines may receive inadequate chilling in some cases. How much is adequate, differs based on species (genotypes) and the location of the vineyard (climate). Studies show that chilling hours between 50 and 400 at a temperature lower than 7°C are necessary for normal grapevine bud growth (Dokoozlin, 1999). In a two year study from Egypt, where vines are grown under warm climatic conditions, the Beauty Seedless, Palomino, and Rish Baba cultivars required 18, 247, 89 and 180 chill units at ≤ 7.2°C respectively, to achieve 50% bud break (Mohamed et. al., 2009). While a study from Veranópolis, Brazil, from 2010, shows that Chardonnay, Merlot and Cabernet Sauvignon cultivar required 136, 298 and 392 chilling hours respectively, to overcome endodormancy (Anzanello, etc. al. 2018). Studies also show that as the number of chilling hours increases, the time required for budburst is reduced.

An interesting study is being conducted in an #organic #vineyard located in the Penedès region on #carbon sequestration in the vineyard. Namely, different studies show that carbon farming has a very promising role in reducing the levels of atmospheric CO2. https://t.co/jMF269ZOcT

New features are coming for you #winegrowers 🚜🧑‍🌾💪

Interesting article on #Austrian Winemakers and their #Biodynamic Farming 🍇👨‍🌾💚🍷