Pesticide use, and their impact on fruits

Use of pesticides for plant protection is nowadays widely spread among food producers and home users. But do you know how used pesticides impact on fruits?

Pesticides are chemical substances which destroy pests and are used for agricultural and non-agricultural purposes. In general, the term pesticide is used to describe plants protection products, which are protecting plants or plant products against pests. Therefore, it refers to all chemical substances which are used to protect plants against insects, weeds, and diseases. According to their chemical structure, the pesticides can be: organic, inorganic, synthetic or biological. Organic pesticides usually contain carbon in their chemical structure and are more complex than inorganic pesticides which do not contain carbon. Most of the pesticides that are in use are organic – synthetic or biological. Biological pesticides are derived from naturally occurring sources such as plants, algae, fungi or bacteria. While synthetic pesticides are made artificially by chemical synthesis. We should be aware that the vast majority of synthetic i.e. “modern” pesticides originate from war poisons.

Pesticides have several benefits: they help to control harmful organisms and weeds which are destroying crops and threatening peoples’ lives. For examples: pesticides are killing mosquitoes that can be transmitters of dangerous diseases, protect animals against parasites, and kill weeds that threaten the environment. They also help farmers to increase crop yields to provide enough food for a growing population, decrease food costs, and prevent sickness that can be caused by moldy food. But there is a thin line between positive and negative effects of pesticide use. Pesticides can have negative effects on human health. They can harm people in several ways: people can get exposed through the process of application, toxic residue in plants or plant parts, such as fruits, and indirectly through environmental pollution. Pesticides are polluting water, contaminating soil and murdering non-target pests, such as bees and other pollinators. And we all know that without pollinators there is no life on earth. Since pesticides are hazardous to humans and animals, it’s good to know that pesticides have different operating modes. 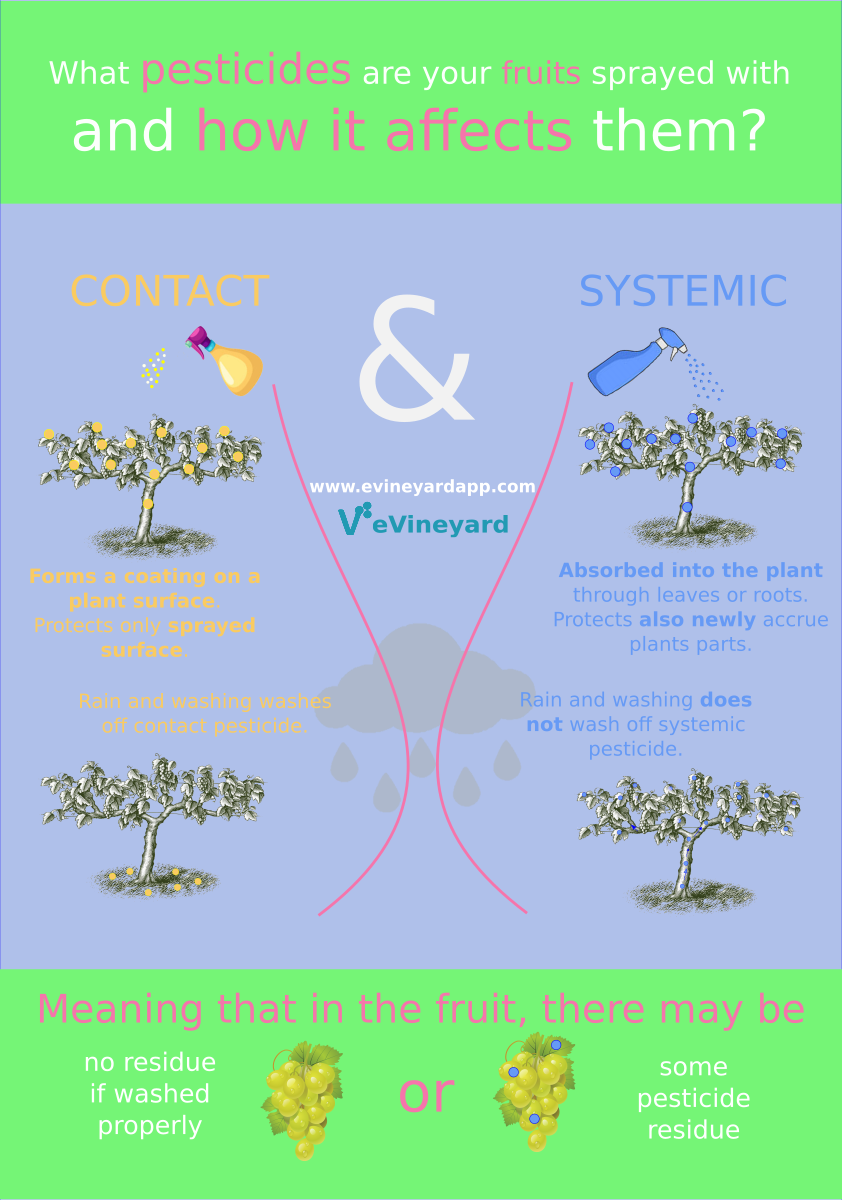 The infographics shows different pesticides according to operation modes and their effect on fruits. Pesticides that are forming a coating on plant surface are called contact pesticides. They protect only sprayed surface and can be washed off. There are also systemic pesticides which get absorbed through the leaves or roots into the plant’s vascular system and get distributed to other (not sprayed) parts of the plant. Since systemic pesticides cannot be washed off the plant by rain and are located inside the plant, they can protect also newly accrue plant parts. Fruits from plants that were sprayed with contact pesticides do not contain residue (if they are properly washed), while the ones sprayed with systemic pesticides may contain some pesticide residue even when they are properly washed. Despite the fact that your purchased fruits may contain pesticide residues, they are probably not toxic to your health, at least not on short term. Maximum residue levels of pesticides in or on food are namely strictly regulated by law, and differ from country to country.

So next time you go and buy some veggies and fruits make sure to pay attention to what kind of food are you buying and which pesticides are you using at your backyard. In the end, we as consumers determine the quality of food retailers are offering and farmers produce for us.