Black rot is one of the most important grape diseases, and it caused by fungus Guignardia bidwellii. It originated from Northern America, but can now also be found in Europe, South America, and Asia. The fungus appears in warm and humid climates and can cause significant economic damage. It can infect all young green parts of the plant, but makes the most damage when it appears on fruits. 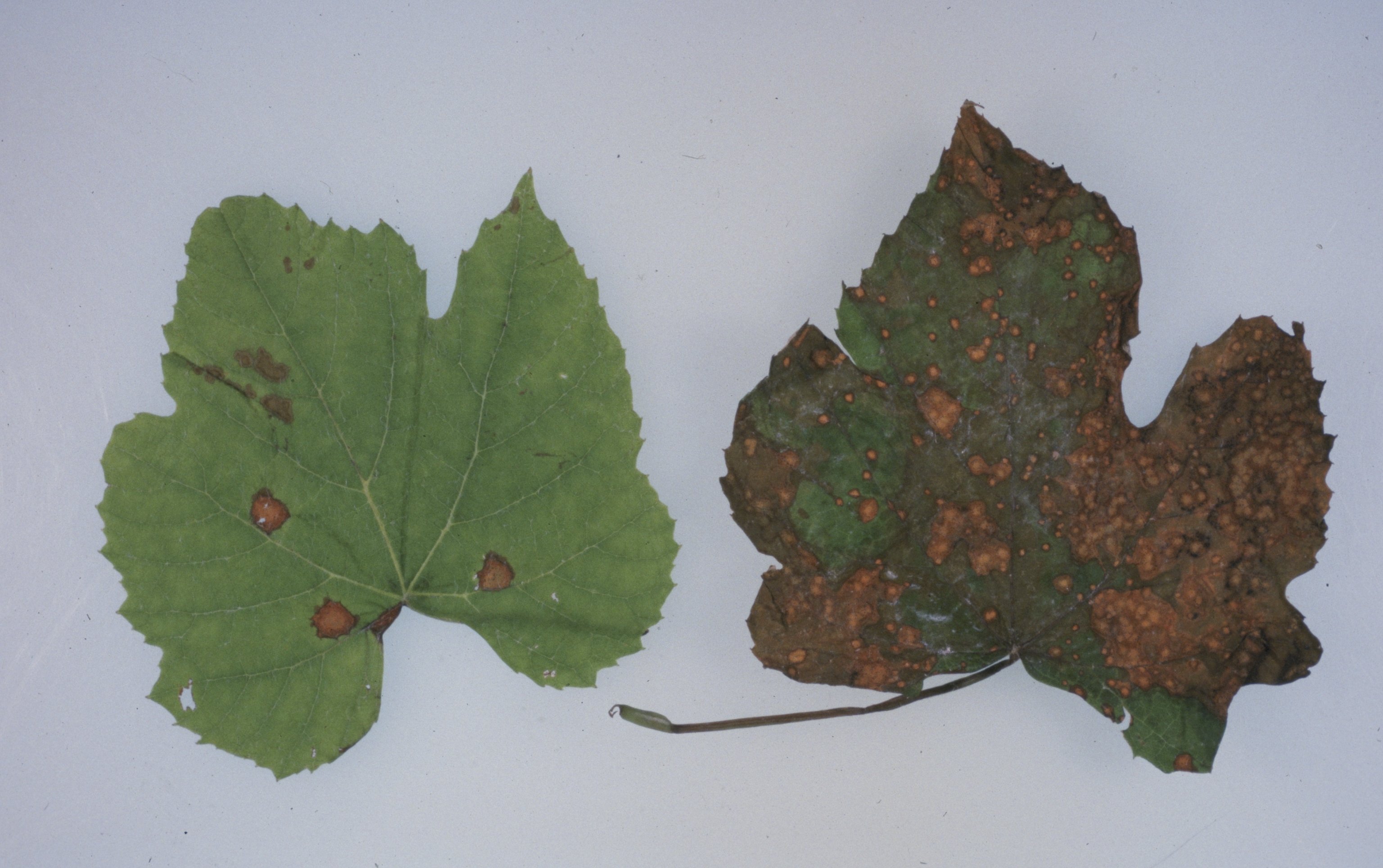 Symptoms
Symptoms of the black rot infection appear approximately 2 weeks after the primary infection. On leaves, the infections first appear as small brown circular spots, which can enlarge and develop light brown centers with dark margins.

After a few days, numerous tiny black fungal fruiting structures called pycnidia develop. The disease can develop only on young leaves, older ones are resistant to it. Black rot symptoms can appear also on shoots, petioles and tendrils as brown to black irregular lesions. Similar as on the leaves, also here tiny black fungal fruiting structures (pycnidia) appear within lesions. The fungus infects also berries, usually while they are still green. On berries, infection is first seen as light brown spots that eventually become dark brown and cover the entire berry. Also, here pycnidia’s can be seen. Infected berries shrivel and become black mummies. 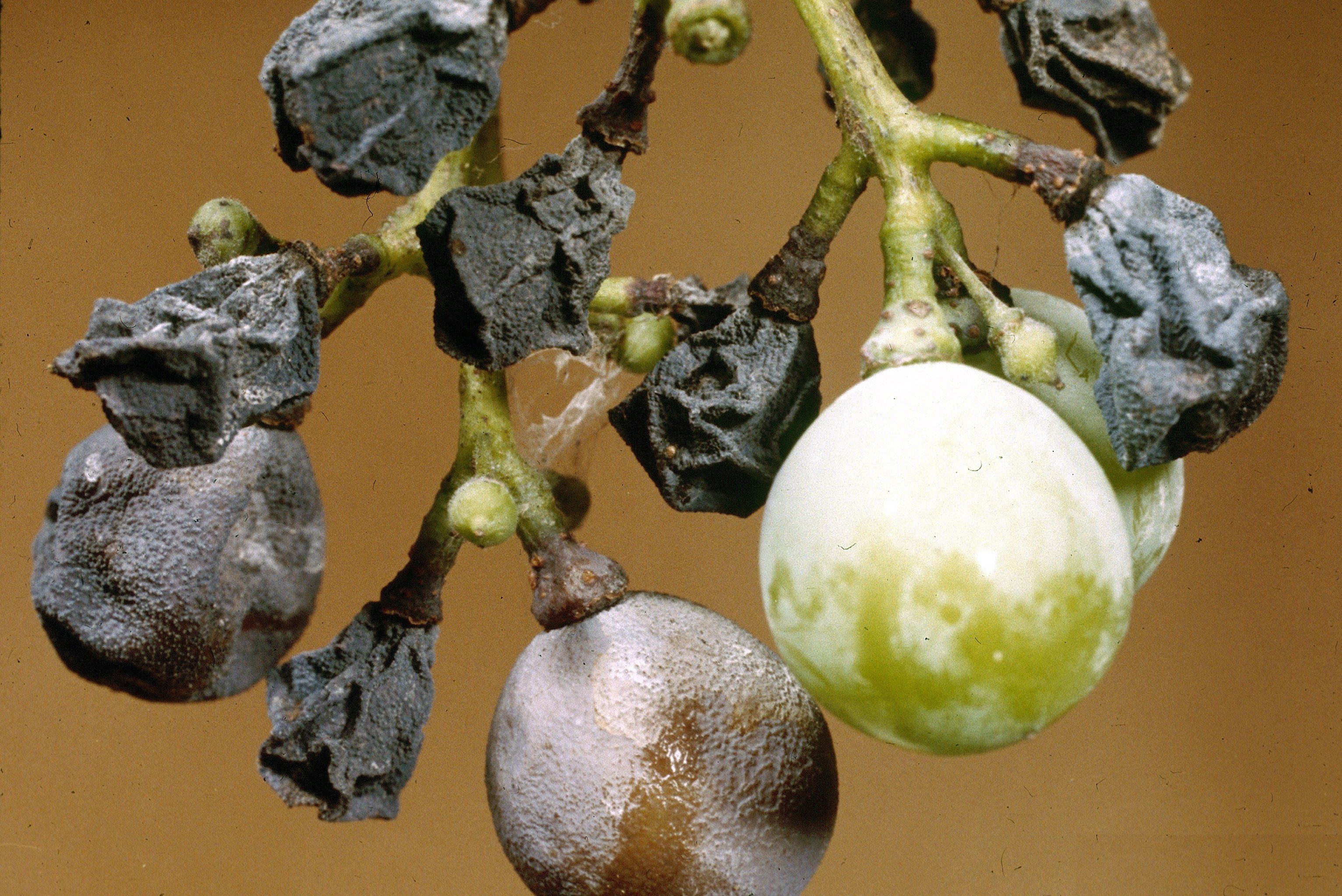 Disease cycle
The black rot fungus overwinters in black mummies, on the ground, fallen leaves and/or in the infected shoots. In the spring, ascospores released infected fruits with a rain, which are then dispersed by water and the wind. These ascospores initiate the disease cycle and cause primary leaf and blossom infections. Infections depended on the length of leaf wetness period, and air temperature in that period. The secondary infection is caused by spores’ conidia during the whole growing season if only the environmental conditions are favorable. 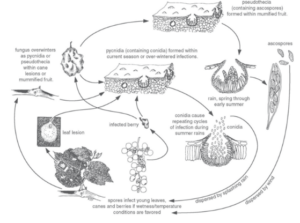 Disease management
The most efficient way to control black rot is through a combination of good cultural practice and chemical methods. Good cultural practice includes: sanitation – removal of all mummies and infected leaf from the vines, choosing resistant varieties, selecting a site with good air circulation, removal of weeds and tall grass, and wise pruning of the vines. For successful black rot management program also fungicides can be used, where the proper timing of spraying is essential. It’s crucial to control primary infection, which can prevent secondary infections later in the season. In case of infection, protective spraying has to begin before bloom through four weeks after the bloom. Fungicides should be used only when the risk of black rot infection is high, what result in lower numbers of applications during the season and protection of the environment. For determination of high-risk infection periods, available disease prediction models should be used.

Although black rot disease can cause a lot of damage in the vineyard, it’s not that hard to control it. Especially if winegrowers are familiar with the characteristics of infection conditions, and take good care of the vineyard.

So winegrowers, what are your experiences with black rot fungal disease? Let us know in the comment below!