Gray mold of grape, also known as Botrytis bunch rot, is a fungal disease caused by the fungus Botrytis cinerea. It’s one of the most important diseases of grapes in the world, which can cause serious losses in grape yields. The fungus can occur anytime during the growing season, but most commonly occurs near the harvest time. At that time, birds and hail damage can encourage infection.

Usually, Botrytis cinerea infects ripe berries. First infected berries become soft and watery, which under high relative humidity and moisture become covered with the grey sporulating growth of the fungus. When berries of white cultivars become infected, they turn brown, while berries of the purple cultivars turn red. Infected berries then shrive and become “mummies” which drop off. Symptoms of gray mold can appear also on the leaves, as dull green spots which turn brown and necrotic. Infection on pedicel and rachis appear as brown spots that turn black and cause shrivel, and drop off the cluster. 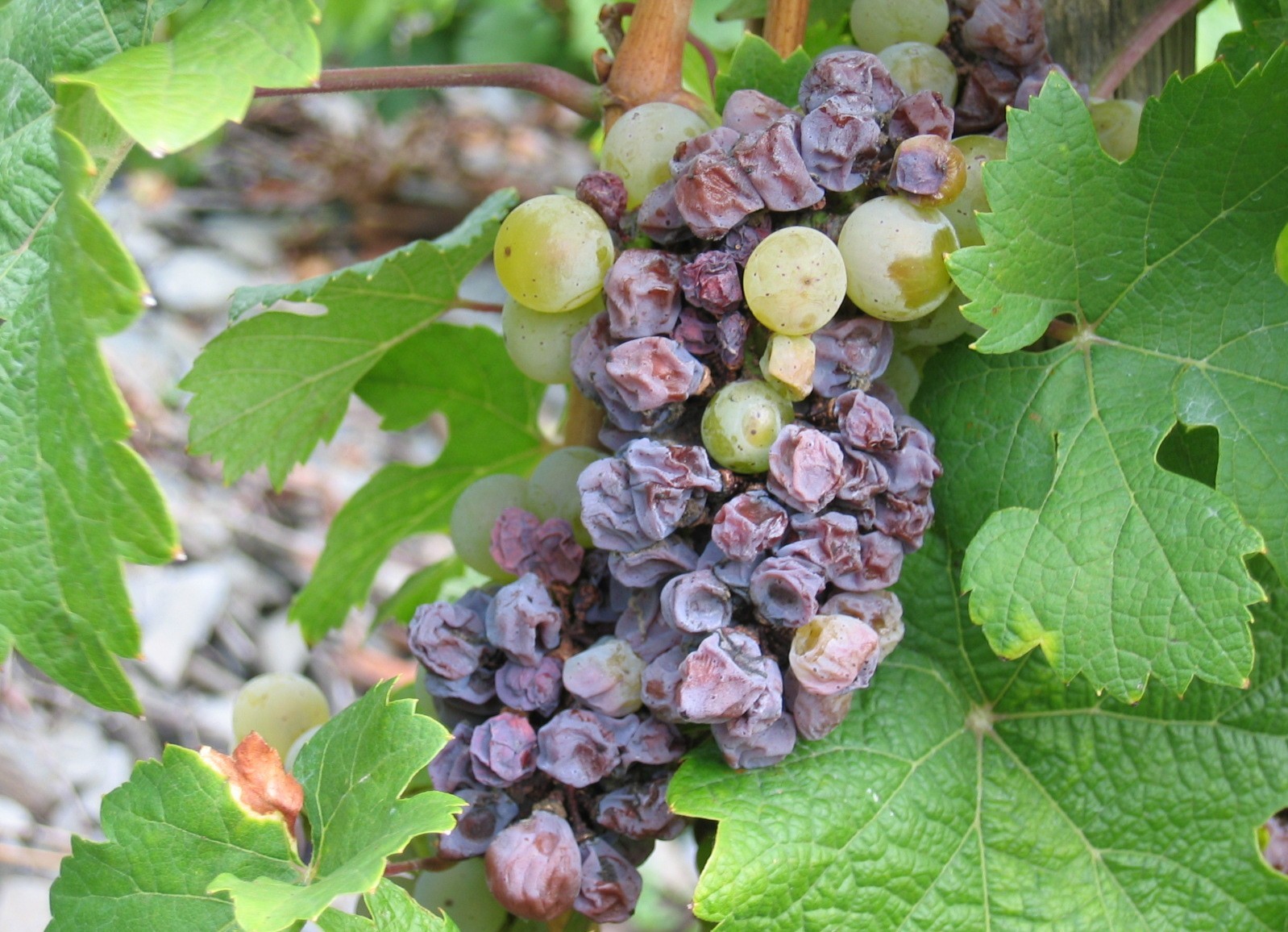 The fungus overwinters in grape mummies, dead grape tissues, and other plant hosts. In the spring, the fungus produces spores (conidia) from hard resting structures (sclerotia). Conidia are dispersed by the wind which cause several new infections. The disease can develop through the whole growing season in the temperature range between 3 and 30 degrees Celsius. In late spring, a fungus can infect young shoots, blossoms, and leaves. Berries that get infected during blossom can cause early season sour rot while berries that escape early infection may become infected near the harvest time. When the infection occurs on berries after the blossom, fungus remains inactive until the veraison. Wounds on berries, caused by birds, insects, hail, or powdery mildew, increase the possibility of infection with Botrytis. Also wet and humid environmental conditions increase the disease development. Optimal conditions for disease development are at temperatures between 15 and 20 degrees Celsius, free moisture, and high relative humidity (above 90%). 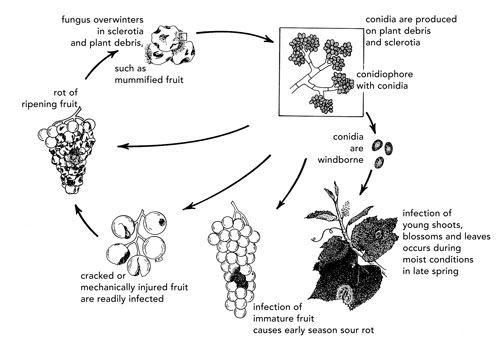 Gray mold can be efficiently controlled by the use of the good cultural practice. Since fungus overwinters on the old plant tissues, sanitation is extremely important. Proper pruning methods, which ensure good air circulation, and destruction of all old canes and clusters, reduce the possibility of infections. Later in the season, the weeds control, removal of leaves around clusters, and preventive measure against pests, such as birds, insects, and other grape diseases, plays an important role. When the possibility of infection is high, the fungicides can be applied, but only at the appropriate time. To determine the right timing, help yourself with model-driven decision support system, eVineyardapp. Use pesticides with caution, because Botrytis cinerea can quickly develop resistance.

Winegrowers, are you familiar with the symptoms of the Botrytis bunch rot and its disease management practices? Is there something you would like to add?