Overview of Grapevine Structure and Function

Grapevine is an interesting plant not only that it produce some of the best fruit on earth which can be transformed into the wine, but also as the plant itself. Grapevine is a permanent plant but differs from other permanent plants in many ways. So, in order to successfully maintain vine and produce the best possible grapes and thus the wine, it’s important to know each and every grapevine parts and it’s functions. For this reason, we have decided to make a series of posts on grapevine structure.

In the first part, we will shortly introduce all the basic parts of grapevine.

Grapevine is a climber which naturally grows on the trees and bushes, high and in wide shapes. In the vineyard its growth is maintained with the pruning in order to control the quantity and quality of the grapes. 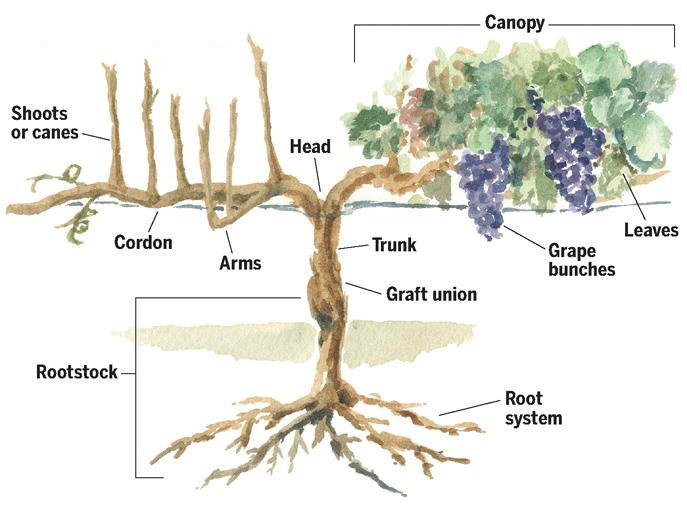 Root system – the roots of a grapevine are multi-branched structures that grow to various depths into the soil depending on the variety (rootstock), soil and climate. Some varieties develop very deep and almost vertical roots while others have very flat and shallow roots system and therefore requires deep, fertile soil.

Canes – When the shoots mature and woody, it becomes a vine cane. Canes if therefore one year old, woody and, matured shoot; after the leaves has fallen off. Canes are the main concerns for winegrowers during the dormant season. With the winter pruning of canes, winegrowers are managing vine size and shape and therefore control the quality of crop in the coming season.

Shoots – are green stems which develop from buds, and represent the primary growth structure of grapevines. The shoots that arise from primary (winter) buds are normally the fruit-producing shoots. The shoot consists of stems, leaves, tendrils and fruits. *Canopy is a collective term that is used to describe the shoots, leaves, and fruits of the grapevine.

Tendrils – are a slender structure that appears on the top and sides of stems. They grow until the grapevine is ready for harvest, after the harvest they become wooden in nature. Since the grapevine is a climber it needs tendrils to coil around small objects such as fences, trellises, etc. to reach up for the sun and heat. Tendril and flower cluster have a common development origin, therefore, we might find flowers design developed at the end of the tendril.

Flowers and Grapes – Flower cluster grow on the opposite site then leaves along the shoot. Most fruitful shoots develop from one to three flower clusters depending on the variety and growing conditions. Each cluster may contain only a few or up to several hundred flowers at the time of bloom; the number depends on the variety and environmental conditions. When fertilized, the flower clusters develop into clusters of grapes – the fruit set – and the berries start to grow.