Dormancy is a phase in a grapevine growth cycle which occurs after the grapevine drops it’s leaves, and ends in late winter to early spring. Dormancy phase helps vines to tolerate cold winter temperatures, and has an important influence on grapevine flowering and vegetative growth in springtime. During the dormant phase, vines need to be exposed to enough hours of chill temperature in order for the bud break and normal spring growth to occur during the next season.

What is going on with grapevines during the dormancy?

Although it may seem that nothing is happening with the grapevine during the dormant phase, that’s not exactly true. Little activities do occur – vines respire, for example – in order to maintain basic metabolic functions. During the dormant phase, grapevine survives based on carbohydrates reserves stored during the previous growing season, mostly as starch, in permanent wood structures, such as roots, trunks, and cordons. Since dormant vines have to exist on their stored reserves from leaf fall until new shoot growth in spring, it’s extremely important to prepare vines well for resting.

Dormancy is not a uniform state within the development of plants, there are two types of dormancy during the winter, namely endo-dormancy, and eco-dormancy.

The name endodormancy comes from a Greek word Endo and means inside. Therefore, endodormancy is a stage where growth is controlled by plant growth regulators inside the buds. The plant growth regulators that play a key role in the regulation of the metabolic changes, and are responsible for the grapevine to enter into an endodormancy and thus survive the winter temperatures, are called abscisic acid (ABA). In this dormancy phase, grapevine will not grow even under the favorable (growing) environmental conditions, such as adequate moisture, long day length, and warm temperatures.

In order for the vine to prepare itself for cold winter, it decreases the level of water in various tissues with the process of dehydration through movement of water to intercellular spaces, and accumulation of sugars and protein complexes that bind water and serve as cryoprotectants. In that way, cell content won’t form damaging ice crystals (and freeze) in cold temperatures. 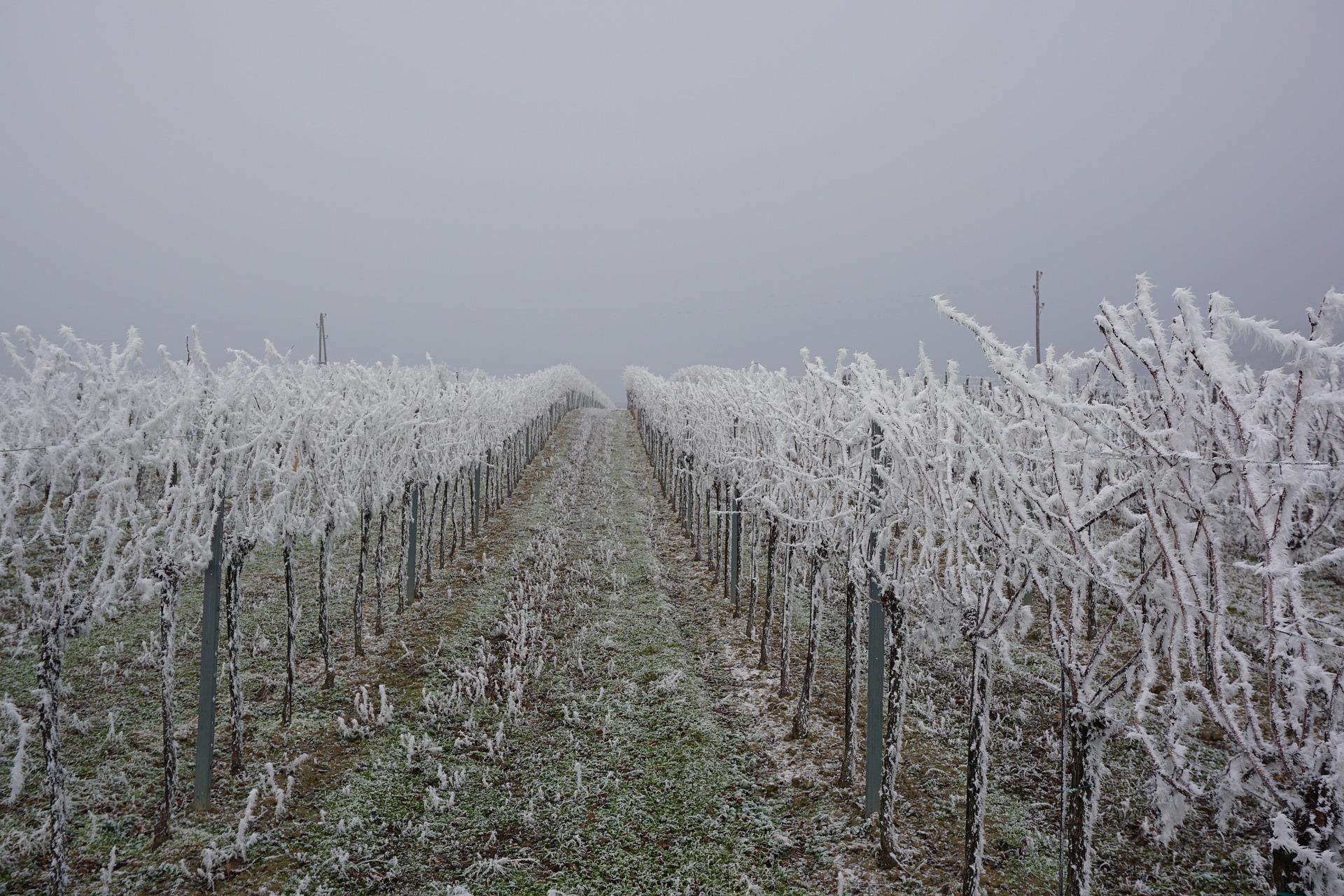 As long as the grapevines are in the endodormancy phase they can acclimate to cold freezing weather, and survive low temperatures.

During the endodormancy phase, chilling requirements (a specific amount of cold) of a grapevines needs to be met in order for the grapevine to bud break later in the season. If not, delayed bud break or prolonged dormancy can occur. This can later have effect on the flowering and growth of the vines, and therefore on quality and quantity of the crop.

In order for the grapevine to transit from endodormancy to ecodormancy, it needs to be exposed to cold temperatures for a certain period of time. The period of time required in the chill conditions varies among grape varieties. Although it’s still not exactly clear how much chilling hours is required for the grapevine to transmit, grapevines compared to other perennial crops, like cherries or peaches, need little chilling. UCCE Viticulture experts from California state that most grapes need only about 150 chilling hours to budburst, while Dokoozlian found in his study that a minimum exposure of 200 hours is required to achieve commercially acceptable levels of budbreak of Perlette (Vitis vinifera L.) grapevine cuttings. Note that chilling units are hours of time spent above freezing. Temperatures below freezing have no effect on the chilling requirement, but increase cold hardiness.

In the endodormancy vines are cold hardy, which means that as long as they are in that phase, they have the ability to acclimate to cold freezing weather.

The second phase of dormancy is called ecodormancy, a phase in which environmental conditions don’t allow the vine to bud break. In this phase, the plant is actually ready to grow, but low temperatures inhibited bud development, therefore in this stage, low-temperature blocks the bud development.

Once the warmer temperatures occur, the plant will start to grow. And once they do, they can’t adjust back to colder temperatures anymore. Since vines reach the ecodormancy phase in most temperate locations by early winter, it can happen that due to unusually warm weather grapevine budbursts prematurely. This can be devastating for vines, especially when after a period of warm weather, a cold front arrives. Due to climate change, several such events are expected in the future, and grape growers will have to find a way to overcome grapevine frost events.

Note that apart from the temperature there are also other factors that affect the time of vine budburst, such as variety, soil temperature, rootstock genotype, cultural practices, the timing of winter pruning, and any application of growth regulators. While a certain mean air temperature (above 10°C or 50°F) is required for a sufficient period of time in order for the grapevine to budburst, also variety plays an important role. Some varieties require more heat in order bud break than others. Bud burst is also dependent on soil temperature in the grapevine roots zone: higher temperatures mean earlier budburst, therefore, site selection and soil management do play an important role in bud break.

Winter dormancy has an important role in a grapevine growth cycle, as it helps vines tolerate cold temperatures, and ensure bud burst and normal spring growth. Two types of dormancy occur during the winter – endodormancy, and ecodormancy. While in the endodormancy phase vine will not grow even under the favorable growing conditions due to plant growth regulators inside the vine buds. After the chilling requirements are met and vine gets into an ecodormancy phase, temperatures do effect on vine growth. Therefore, it’s necessary to monitor temperatures in the vineyards in the winter time as well, as they influence on crop yield in fall.