Most common vine diseases are the one caused by fungi. According to the literature, there are more than 60 different species that can infect grapevines. Each fungus develops under certain environmental conditions. The article below describes symptoms and weather conditions for the development of the four most common fungus vine diseases.

One of the most important vine diseases that can cause complete destruction of grapes and vine vegetation is Downy mildew. It infects all aerial parts of the plant from mid-May to late autumn. The rule over thumb is that primary infection occurs when there is at least 10 mm of rainfall, and temperatures are at least 10 °C  during the 24-h period. While secondary infection occurs when there is high humidity at temperatures above 13 °C during at least 4-h of darkness.

The disease can be recognized by oil spots and moldy cover or bright green spots on leaves and white moldy cover on shoots and inflorescences. Downy mildew can infect also berries that thrive and dry out (they looks like a brown-purple raisin) or in later stage soften and become brown violet color.

Powdery mildew fungus can infect all green parts of the plant. The disease developed through the whole growing season until late autumn. It thrives best in warm, humid and cloudy weather. Ideal conditions for the development of Powdery mildew are very hot (25 – 30°C) and humid days.

Symptoms of the infection are moldy coats on leaves, inflorescences, and rachis. At the early stage of berry development, infected berries are covered with a gray coat and dry out shortly after. When half-ripe berries got infected, they crack and dry out. Canes can also get covered with a gray coating, an old infection appears as reddish-brown spots.

Grey mold disease can develop throughout the whole growing period but most commonly appear near the harvest time. In rainy years and excessively fertilized vineyards is more likely that the Botrytis will appear. Most optimal conditions for disease development are temperatures between 15 and 20°C, free moisture, and high relative humidity.

Gray mold cause spots on leaves which turn brown and begin to rot. Leaves then start to dry and fall off. It can also infect inflorescences which rot and dry out. Grey mold makes the most damage when appears on ripe berries. Most obvious symptoms of Grey mold is mold that is covering berries which in the last stage shrive and become “mummies” which drop off. 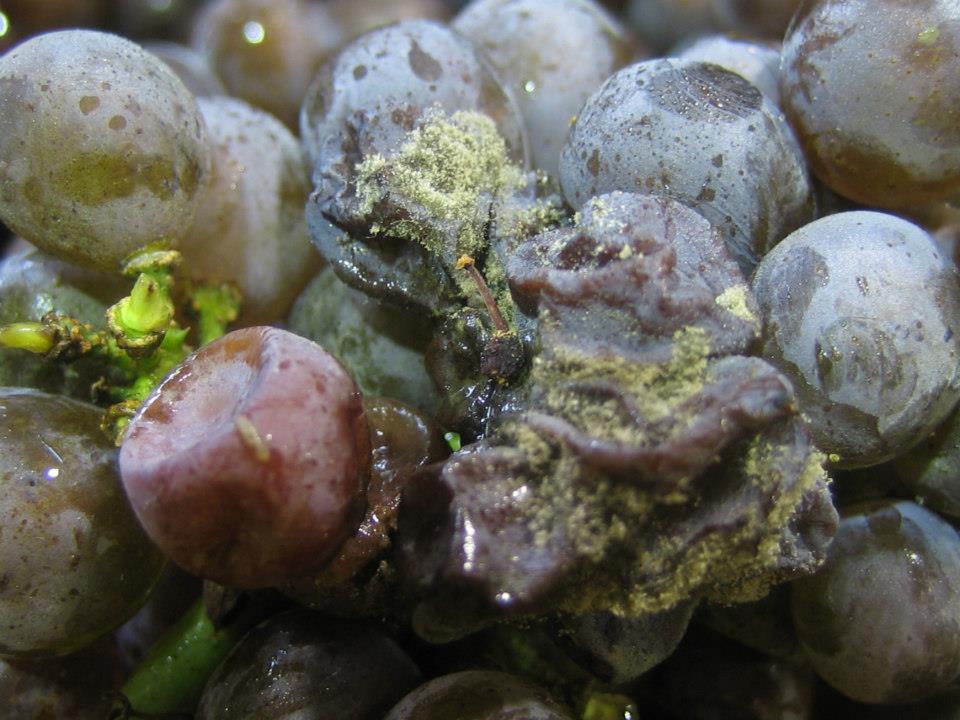 Black rot can infect all aerial parts of the plant. Fungus mainly occurs in humid and warm environments, from mid June to late August. Infection develops at the temperature range between 8 and 32°C, and just like with the Downy mildew the rain increases the possibility of infection.

Disease can be recognized by round brown spots on leaves and shoots. Shoots then begin to perish, and dry out. The most harm fungus make on berries, in midsummer, when red-brown to gray spots appears on them. Berries quickly lose moisture and shrunk and look like brown-black or blue-brown raisins full of black dots. Fungus does not appear on fully ripe berries.

Winegrowers, what are your experiences with most common vine diseases? Let us know in the comment below!

An interesting study is being conducted in an #organic #vineyard located in the Penedès region on #carbon sequestration in the vineyard. Namely, different studies show that carbon farming has a very promising role in reducing the levels of atmospheric CO2. https://t.co/jMF269ZOcT

New features are coming for you #winegrowers 🚜🧑‍🌾💪

Interesting article on #Austrian Winemakers and their #Biodynamic Farming 🍇👨‍🌾💚🍷