How to prevent vineyard frost damage?

During the growing season, all green parts of the grapevine are susceptible to frost. Spring is a particularly delicate period for the vines, since spring frost often damages opening buds and young shoots, and hazards the crop load. Not all vine varieties are equally susceptible to frost, as well as susceptibility depends on bud development stages. In some regions, fall frost that occurs prior to the harvest, can lead to premature leaf fall, and increase susceptibility to Botrytis attacks. In order to prevent vineyard frost damage, several passive and active methods can be used, while having weather stations across the vineyard which can provide warnings on extreme weather conditions and/or having a reliable weather forecast can be of great help as well.

Critical temperatures for grapevines differ based on the growth stage, while during the winter, dormant buds can resist temperatures below -10°C and even down to -20°C and more, due to cold hardiness in endodormancy phase. However, new growths can be damaged at -1,1°C. In the table below are presented critical temperature values (in °F and °C) for grapevines in different growth stages, as found in the study which was made at Michigan State University for cv. Concord.

There are two different weather events that can harm vines  – Radiational Frosts and Advective Freeze.

It can also happen that a combination of advective and radiative conditions occur. For example cold air mass enters into a region, which results in the advective freeze, then for several days clear and calm conditions follow that cause radiation frost.

The most important element of frost protection is of course site selection and choice of varieties (late vs. early variety). Since cold air flows downhill, the mid-slope positions are warmer, if there are no trees, brush or other air dams that prevent cool air to flow out of the vineyard. Different grape varieties vary in the date of budburst, so it’s somewhat recommended to choose early bud burst varieties in locations with the lowest risk of frost.

Photo (E. B. Poling, 2008): Cold air drains downhill and settles in low spots during a radiational cooling period. You want your vineyard to be in “Thermal belt” and free of any air dams, such as trees, brush, etc. which would prevent cool air to flow out of the vineyard.

Wet soil holds and stores more heat, so low-laying air stays warmer for a longer time in this way. Therefore, in order to prevent frost in the vineyard, the soil water content should be near field capacity 2-3 days prior to the frost event. However, this method has also some drawbacks such as the risk of erosion, loss of soil organic matter, destruction of soil structure, etc.

Although there are several benefits of using cover crops in the vineyard when it comes to preventing frost, cover crop does not affect the situation drastically. However, cover crops prevent soil to absorb and hold heat, it was reported that the temperature of the bare soil can be up to 2°C higher compared to the floor with 5 cm high grass. Tall cover crops can also slow down the movement of the cold air out of the vineyard. Additionally, cover crops tend to harbor ice-nucleation active (INA) bacteria which can cause more freezing injuries. What winegrowers can do is to mow ground cover short before the frost-prone period or if there is no erosion concerns even cultivate the cover crops prior to that period.

With vineyard management practices such as pruning, winegrowers can influence on the date of bud burst and thus reduce the risk of frost injury. This can be achieved with either a delayed pruning, since unpruned vines bud burst later than pruned vines, or with double pruning. When conducting double pruning, do early pruning to long spurs with 5-8 buds, as this will suppress the growth of basal buds, and once frost risk passes or basal buds begin to break, do a final pruning. 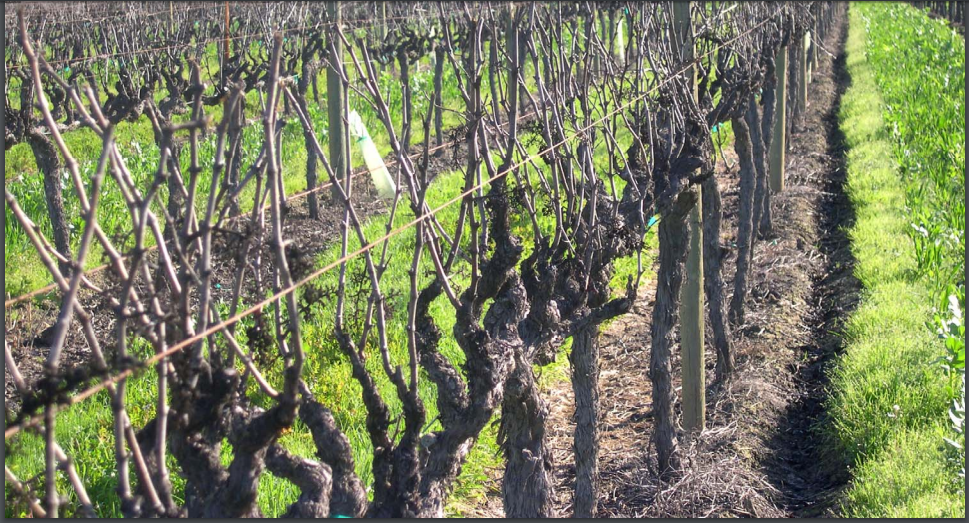 Double pruning, one of the passive frost protection methods.

While active frost protection methods include activities in the vineyard which increase the temperature above the injury level and therefore influence on vineyard micro-climates, such as wind machines, orchard heaters, and overhead sprinklers. 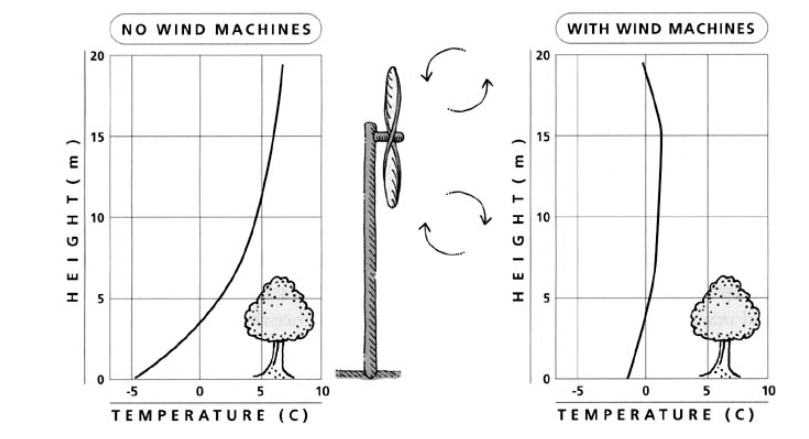 Photo (FAO, 2005): Effect of wind machines on the temperature profile during a radiation frost.

Wind machines are very expensive and are profitable on sites where there is a high probability of damaging spring frost – such as on 1 in every 5 years. So instead of purchasing wind machines, winegrowers sometimes prefer to make use of helicopters which also can mix inversion layers. This is a much more expensive method to protect vines from frost damages, but in areas with a low probability of spring frost more than a welcome option.

Heating the vineyard air is one of the oldest practices to protect vines against spring frost. Some winegrowers are still burning prunings to heat the air, while fossil-fueled heaters are not largely used as they are expensive (cost of fuel and labor costs), inefficient (lot’s of energy is lost to the sky), and pollute the environment. Heaters work best with temperature inversions, if there is little to no inversion or wind is blowing the heaters may not provide adequate protection. In order to properly protect vines, heaters should be uniformly distributed through the vineyard and turned on before the critical temperature is reached. To lower the cost of operation heaters can be used in combination with sprinklers or wind machines. In combination with wind machines, the temperature can be raised for 3 to 4 degrees.

Vines can be protected against frost also with the help of water sprinklers. When water is sprayed and freeze around green tissues it releases heat and thus protects vines. For this method, a large volume of water is required since constant liquid water is needed to form a freezing coating around vines buds and shoots to release heat and rise the temperature. This is the only method that can provide frost protection during the advection frost as well, if used properly.

Photo (AccuWeather.com): Water is sprayed on grapevines with over-vine sprinklers to freeze around green tissues, in order to prevent vineyard frost damage.

Tabel (Rober G. Evans, 2000, ASEV): The wet-bulb temperature will help you determine at what air temperature you need to start and stop over-vine sprinklers in order to protect vines and prevent frost damage.

We have presented passive and active frost preventing measures that winegrowers can use to protect vines. Most of the passive methods should be considered before planting the vineyard, such as gathering long-term weather data and frost events, especially if planting a vineyard on a new site, carefully choosing vine variety, cultivation and pruning methods, etc. Passive methods often eliminate the need for active methods, plus they are much less costly.

Any active frost protection method should be chosen based on vineyard site specifics and winegrowers financial capabilities. Often winegrowers are combining different methods to protect vines and use for example sprinklers in combination with wind machines, heater with wind machines or sprinklers with heaters, to efficiently protect vines and lower the costs. In the most critical moments, winegrowers often reach for spray materials, which supposed to protect vines against frost. Although in laboratory studies many spray products reduced freezing temperatures, results in simulation trials show no effect at frost temperatures of -6°C and -4°C. Therefore the practical value of spray-on frost protectants is questionable. The reason for that might be that the tested temperatures have been below the limit of protection and/or there was no sufficient time for protective effect to develop. However, results give some optimism, therefore we will pay attention to new research results about spray-on frost protection, as they might be a useful and low-cost alternative compared to other frost protection options.

Winegrowers, which frost protection methods do you use to prevent vineyard frost damages? Let us know in the comment below.

Wineries it's time to really focus on the domestic market when selling wines 🍷🍾 during the #CoronavirusLockdown https://t.co/0kjRfIavJK #onlinewinesales #wine

#WineMarketing
In the coronavirus epidemic, #wineries can make online wine tasting so that anyone interested can do it from their couch. https://t.co/EsEd9HZ16c
#wine #winery #winetasting