Importance of Bees in Vineyards and their Protection

When you think of winegrowing, you might not think of bees as they are not needed in the production of grapes. Grapevines are hermaphrodites, have both male and female reproductive organs, and can self-fertilize (are wind-pollinated). However, bees are essential organisms in vineyards and actually do have an important role in wine production.

Why having bees in the vineyard?

Plants that grow around grapevines are crucial for a healthy vines environment, and they do need bees to pollinate them. Bees are the primary pollinators of several plants and cover crops planted in the vineyard. Cover crops in vineyards help to regulate the level of nitrogen in the vineyard, increase the organic content of the soil, help improve the water-holding capacity of the soil, eliminate the need for chemicals use, and regulate vines growth. Thus having cover crops in the vineyard and consequently, bees, create a healthier ecosystem for vines that then produce better quality grapes. Having a sustainable ecosystem is the key for any organic and biodynamic winegrower; that’s why several of them have their own beehives near vineyards.

A study from South Australia revealed that honey bees are actively removing the calyptra from grapevine flowers during the flowering phase, and with that increases the pollen yield by 70 % compared to collecting pollen from flowers after capfall. There are several benefits of cap removal by honeybees for the development of berries and grape bunches. For example, bees can help reduce the occurrence of millerandage and formation of live green ovaries (mostly known for the Pinot Noir variety) due to the persistence of the calyptra. They can also be used as entomovector* to place Trichoderma koningii – fungi used as biological control agents for control of Botrytis bunch rot in grapevines.

*Entomovector – a pollinating insect used as a vector to spread a substance used in the biocontrol of plant pests and diseases. The insect is typically a honey bee, bumblebee, mason bee, or any other variety of insect that spreads pollen among plants.

Possible downside of having bees in the vineyard

Some might argue that bees can cause damage to berries. So yes, bees drink juice from grape berry when ripe. However, bees don’t bite the grape to get the juice. If ripe grape berries have a crack or puncture wound from birds, other insects, or natural splitting, then the bees will suck the juice out of grapes, otherwise not. 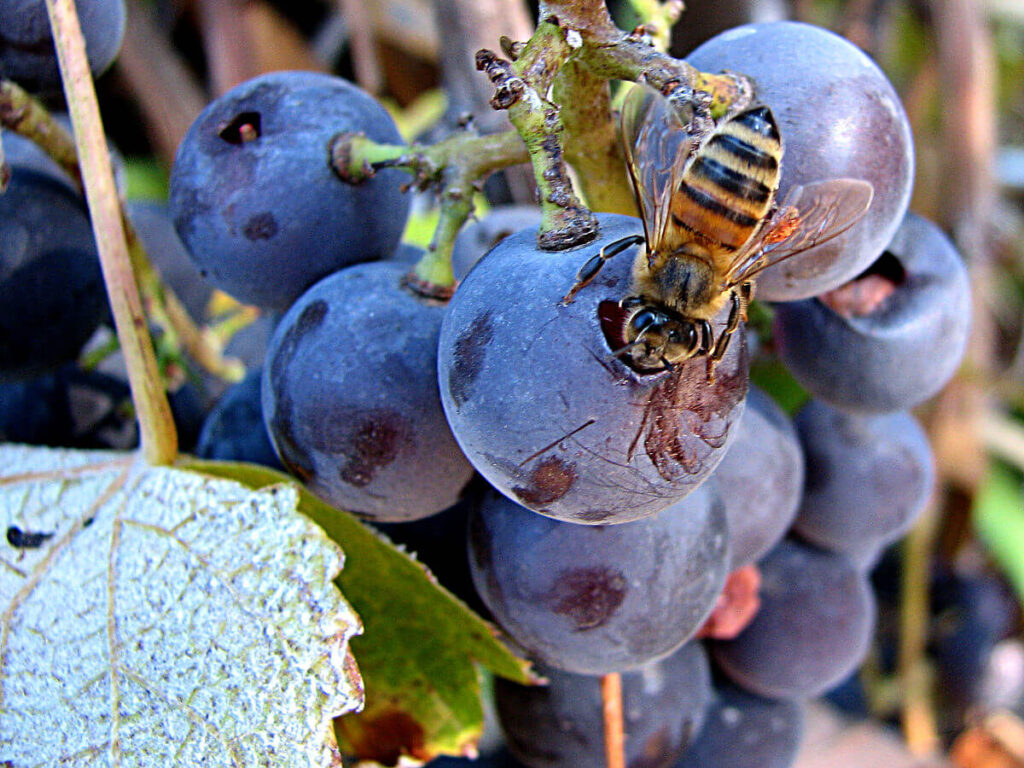 Bees can be found in the vineyards during several grapevine growth stages, but mainly during vines and flowering weeds/cover crops bloom periods. During that time, special care is needed when spraying vines with plant protection products to protect the grapes from pests and pathogens.

Plant protection products (PPPs) are used in agriculture production to protect plants and crops from pests, pathogens, and weeds. As they can contain hazardous substances, special caution is required when applying them. So that they do not harm humans, animals, and the environment. Several initiatives and laws were placed to promote the sustainable use of pesticides.

Although PPPs are necessary to protect crops, to produce enough food to feed all the people, they can have adverse effects on food production, as they can harm beneficial organisms such as bees. Without bees, there would be no life, as they pollinate many plants and plant crops that are essential for human survival. Based on estimations, bees and other pollinators pollinate about 70% of agricultural crops, especially fruits, vegetables, and nuts. While beekeepers each year reports on average 30% loss of beehives. There are numerous reasons why bees and other pollinators are declining; one of the most threatening for the bees are plant protection products. That’s why it’s essential to think of bees when spraying vineyards.

Some practical advice on how to protect bees when spraying vineyards:

So next time you go into the vineyard and spray with pesticides, do think of bees and protect them as they are a vital element for our survival. Namely, a wast majority of the food we eat relies on honey bees and other pollinators. If there is a way to make your vineyard more bees friendly do that, bees are very hardworking, and with their buzz, you will be rewarded several times, also with higher quality grapes.